carrieJanuary 19, 2019outreach, success-forward, their voices, veterans, womenComments are off for this post
Story of Bobbie Lynn (Homeless Female Veteran – Long Beach, CA) Branch: Honorably Discharged Location: Long Beach, CA Bobbie Lynn reached out to Carrie 1/16/2019. Bobbie entered into homelessness in 2012. Her husband passed away in 2010 and after the death of her husband she had a difficult time managing funds and eventually lost her job and home. She has two children (7 and 14 yr old) whom she would like to have with her. Currently the children are with a family member until Bobbie has her own place. She is was not service connected, but CMP took her to the VA and CRRC to get her connected with the right people to push her claim forward. 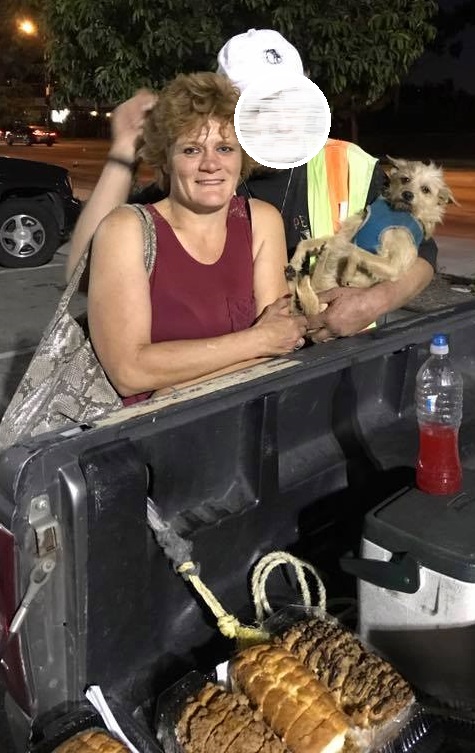 Bobbie getting food from the back of a truck Since 2012, Bobbie has been shuffled from one nonprofit to the next and has not received any long lasting support. What people don’t understand is that after 90 days from the day a government funded nonprofit contacts you and there is no contact, the case is closed. There is no follow up, no assistance, nothing. A lot can happen in 90 days when someone is living on the streets. Things get stolen, lost, or worse — taken by the authorities, which has happen to Bobbie many times. She is now in the process of getting her State ID, social security card, and VA card. In the meantime, she has been on the streets. CMP can secure up to $1,000 in a hotel, but then our funding runs out. Updates: 9/10/19: Bobbie is in contact with her social workers and is working on getting SSVF funding. 2/4/19: She has provided her DD214, Social Security card, and birth certificate to the social worker. CMP ordered her clothing, paid for a new phone, and will be paying for a month of Metro (bus transit in LA), total $150. 2/1/19: Bobbie has been placed in transitional housing by the VA. She qualifies for SSVF and is on her way to success. 1/31/19: Found her at the 99 cent story Thursday night. Bought her dinner and met her friend, who is also a homeless veteran. Taking both to the West LA VA on Friday (2/1). 1/20/19: We put Bobbie in a hotel room for a few nights. She has joined our Success Forward program. I will do everything I can to help her reach HER success point. Read below to understand what success is to her. 1/18/19: Took Bobbie to the Military Veterans Affairs office at the Bob Hope Patriotic Hall. She filed a claim for disability and is waiting on status. She was told to call Volunteers of American, which she did, but calls were not returned.
Related Articles
Homeless Encampment Flooded
What’s Your Routine?
So You Want to Form A Coalition